Facial reconstruction on a Käldamäki skull

One of the most significant archaeological sites of the Nordic countries, Levänluhta, is located in Isonkyrö of the western Finland. Bones of around 100 human individuals have been found at this site which is claimed to have been a lake or a pond and used as a cemetery (Anna Wessman, 2009). The site has been dated to 400-800 AD, mainly according to archaeological artefacts (Wessman, 2009), and for example previous radiocarbon analysis of a tibia points to 437-655 AD (Formisto, 1993). There is a place called Käldamäki in Vöyri near Levänluhta. It is a similar archaeological site also from the Iron Age and human bones have also been found from there, for example an extremely well preserved skull and mandible (lower jaw). The skull was ideal for a face to be built for it based on the details of the skull. It felt incredible and an honour to be handling such old human remains and to think that this individual, who lived so long ago, once looked another person in the eyes.

A morphological analysis was carried out first by studying the skull at the Finnish National Board of Antiquities in Helsinki. Ancestry, sex and age were determined. There were challenges in the assessment as the skull presented some ambiguous features. For example compared to a more modern European population, this skull appeared to have some differencies (e.g. square orbits, broad U-shaped hard palate). For a female skull it appeared to have some more masculine features too (such as the above mentioned and a broad lower jaw). These traits also made me think about the differences between different populations which can still be geographically close to each other. The majority of the features pointed to female (particularly its small size and smooth surface) and it was concluded that the skull belonged to an individual of European origin, female and was around 16-21 years of age at the time of death.

The skull was then photographed carefully in a correct angle that does not distort the proportions of the facial features. The details of the skull were analysed for the facial features to be created as accurately as possible following scientific instructions in measurements and morphological assessment. 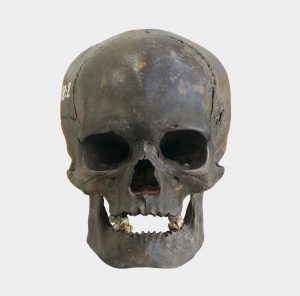 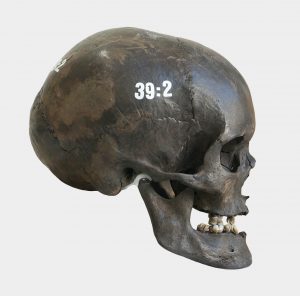 The cranium and mandible were fitted together and positioned into Frankfurt horizontal plane for photographing.
The facial reconstruction was created by drawing, using the separate layers in Photoshop. Anatomically correct face and neck muscles were drawn first. Parotid glands and fat tissue were added to give form to the face. Facial features were created by sketching following the analysis and instructions. Frontal and profile images were worked on simultaneously to keep them consistent. The face was sketched and reference photos of faces and hair were used to make the facial image more realistic and natural looking. Finally, the reconstruction was coloured in Photoshop using paint tools.

Positioning of the eyeballs and the corners of the eyes. 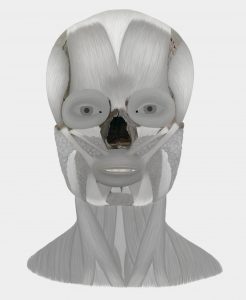 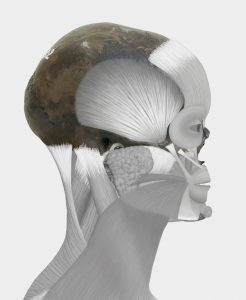 The face and neck muscles were drawn one by one. Parotid glands and fat layer was added. 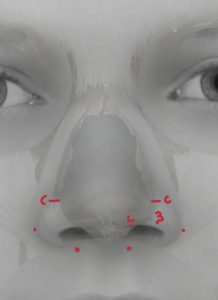 Anatomical markers guiding the size of the nose in frontal view. 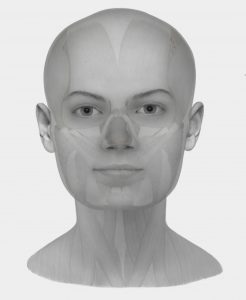 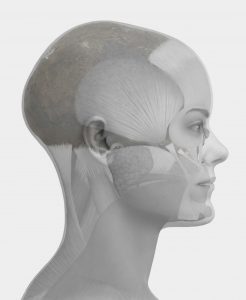 Muscle layer showing through the skin. 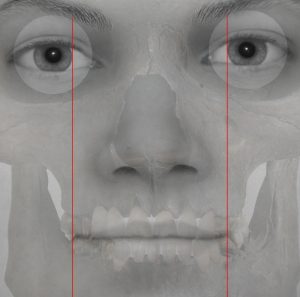 Locating the corners of the mouth based on the inner borders of the irises. 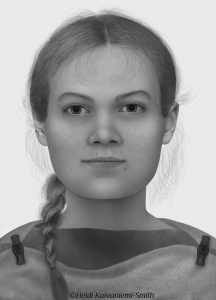 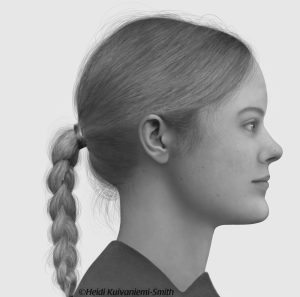 Final result. There is no information on the hair and eye colour at present, therefore the images were left black and white. Hair style and brooch style are based on an archaeologist’s recommendations. These kinds of brooches were found from the Levänluhta site and they are dated to around the Iron Age.

I want to thank Dr Cristopher Rynn (University of Dundee) and Professor Caroline Wilkinson (previously University of Dundee, currently Liverpool John Moores University) and Anthropologist Markku Niskanen (University of Oulu, Finland) for reviewing the skull analysis and facial reconstruction and Archaeologist Anna Wessman (University of Helsinki, Finland) for advising me with hairstyle and brooch-type on the clothing. I am also grateful to the Finnish National Board of Antiquities in Helsinki, Leena Ruonavaara in particular, for giving me access to the skull and providing assistance during my visits there.

Researchers have managed to retrieve ancient DNA sequences from the bones of the Levänluhta site. The results have not been officially published yet but when that happens, it will hopefully shed more light to the origins of the people in this area and potentially make the reconstruction more accurate.

Archaeologist Ulla Moilanen from the University of Oulu asked me to write an article about the Käldamäki reconstruction to her blog Kalmistopiiri:
https://kalmistopiiri.wordpress.com/2018/01/17/kasvot-voyrin-kaldamaen-rautakautiselle-tytolle/
This article was shared widely in Finland and it generated a lot of interest in the media. Here are some of the articles based on the journalists’ inteviews with me:
Ilkka and Pohjalainen (web article and also in the newspaper): https://www.ilkka.fi/tilaajalle/kulttuuri/tilaajalle-7.3187110?aId=1.2519403 (need to log in to see)
Yle Uutiset:https://yle.fi/uutiset/3-10053888
In Swedish (Finnish-Swedish) news also.
Yle Österbotten: https://svenska.yle.fi/artikel/2018/01/28/kriminalteknik-gav-ett-ansikte-at-en-ung-jarnalderskvinna-fran-kaldamaki-i-vora
Huvudstadsbladet: https://www.hbl.fi/artikel/skallen-fran-vora-har-fatt-ett-ansikte-2/

Facial reconstruction of another skull from the Iron Age

Since the first reconstruction I did of the Käldamäki individual I have been thinking if there was an opportunity to work on another skull. There are a few well preserved skulls from a similar site to Käldamäki called Levänluhta which I mentioned above. This is the main archaeological site in the west of Finland where bones of around 100 individuals have been found over the centuries. The challenge with these skulls is that there are no lower jaws (mandibles) attached to them and all the lower jaws are in separate boxes to the craniums therefore none of the well-preserved craniums have a lower jaw which belongs to it.

My first mission was to find a suitable cranium and match is with the correct mandible. This is not easy and handling the bones which are over a thousand years old is daunting. Luckily, I had an experienced physical anthropologist Markku Niskanen from the University of Oulu helping me. We found two suitable looking mandibles but only had time to take photos of one of them due to the place closing for the day. An artist collective Honkasalo-Niemi-Virtanen were observing this process and took photos of the bones.

Studying the photos more closely I found that this mandible was not suitable after all… it appeared too big and robust for the cranium. I went back to study the bones again and concluded that another mandible was better. It ended up being the same one that we had already identified as a potential match earlier. I took photos again and continued studying this.

As a collaboration with the artist collective I started arranging a facial reconstruction to be created of the cranium and mandible Markku Niskanen and I had found. This involved arranging a permission for CT-scanning to be carried out on the skull and the actual scanning place and appointment. I then collaborated with my former tutor Dr Christopher Rynn from the university of Dundee to work on the reconstruction in Dundee. We used Geomagic Freeform software to create a 3D facial reconstruction. I had not worked with this method for some time, therefore Dr Rynn provided guidance to me and worked on the reconstruction himself also. He has developed a faster reconstruction technique over the past few years.

Before starting the reconstruction, a morphological analysis of the skull was completed. The skull had some more masculine traits such as slight brow ridges, quite robust zygomatic bones (cheek bones), visible occipital protuberance (raised area at the back of the cranium). On the other hand, the forehead shape overall appeared to be more bulbous as is often the case in female skulls. It is worth noting that since we cannot be 100 % sure that the mandible in question belongs to this cranium, the more masculine traits of the mandible contribute to the skull appearing more masculine than it would be with a more feminine one. This mandible, however, is a very close match in terms of shape and size and how the condyloid processes fit in to the mandibular fossa. Also, the amount of wear in both upper and lower teeth was similar which points to the correct mandible.

There may be some DNA results available sometime in the future and this could confirm for example the sex of the individual and their ancestral background which is also ambiguous. The age of the individual is estimated to be at least 35 due to dental wear.

The project of the artist collective Honkasalo-Niemi-Virtanen consists of several parts and one of them is an installation which includes an animation of the facial reconstruction among other artwork and for example a discussion with a plastic surgeon.

Here are a couple of videos of the reconstruction (created by Dr Christopher Rynn):