The idea for this project stems from my interest in people from all walks of life and the diversity of the human race. Equality and respect for all is high up my list of values and I like learning about different cultures. I also enjoy depicting people from different geographical locations to keep strengthening my knowledge on the ‘different looks’ of people. My studies in anatomy of skulls and faces have led to this. As a forensic artist, this knowledge is very important.

On this page you’ll see portraits of people from around the world, their photos having been taken either by myself or my friends whilst travelling. I am also working on more personal stories alongside the portraits and one of these is Thorn’s story. See below.

In Memory of Thorn Say Phuo 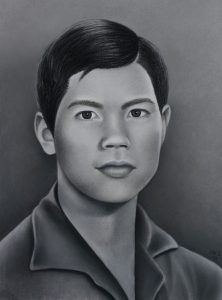 It is 1971. This portrait is of a young man from Cambodia. He was well educated and intelligent; he studied maths and had started working as a teacher. When the Khmer Rouge and its leader Pol Pot took over Cambodia (1975-1979) and started one of recent history’s most horrific genocides in this then prosperous country, Thorn Say Phuo and his family were forced to move several times to escape from being among about 2 million Cambodian victims of starvation, forced labour, torture or execution. They ended up in Finland in 1983 and have lived there since then.

Thorn was paralysed from the neck down as a result of a medical condition and relied on a ventilator at all times for over 30 years. He lived in his own apartment for many years which was made possible by a team of five nurses. He was able to go shopping and in the summer to the beach with the help of the nurses. Most recently he lived in a care home for patients who require a ventilator.

I got to know Thorn over ten years ago when I joined his team of nurses providing 24-hour care. Getting to know him was made easier by his excellent knowledge of Finnish. He learnt to speak Finnish by listening to the carers and other healthcare professionals and was also given formal lessons whilst in the hospital. Thorn told me stories from Cambodia, which inspired me to visit the country. It was a very touching trip and it opened my eyes to what it is like to live in a country suffering from severe poverty and several other problems that spur from it. I also witnessed the traces of the genocide with my own eyes which I will never forget and this has made me more interested in human rights issues. I found the people of Cambodia beautiful and friendly in general, which has left me with a positive image. Magnificent sights such as Angkor Wat and numerous other temples also gave me fond memories of Cambodia.

Another important thing that has touched me through knowing Thorn was his patience and strength of mind. His communication skills made it easier to understand his specific needs. Everyone has bad days of course, but I can’t recall Thorn ever complaining about his condition or saying that he was not being understood. This has stayed with me since I was his nurse and he has been a good example to me in various difficult situations in my own life. Even though Thorn could not work as a teacher for longer in the way he had planned, I am sure he has made a positive impact on many people’s lives and has been a teacher of life in this way. This is how I see him and I wanted to show my respect to him and his family in this way.

I have wanted to draw Thorn’s portrait for a couple of years now as part of this project. Having got more experience using pastels, I finally managed to do that from a small black and white photograph, making it challenging to get the likeness right. Thorn saw the portrait before passing away and was happy with the likeness – that’s all that matters. He also told me what he wanted to say about himself for an exhibition and for this website and was happy for me to add my own thoughts about him. His niece was very helpful getting my messages to him and vice versa. I will always remember him warmly. Thank You Thorn. 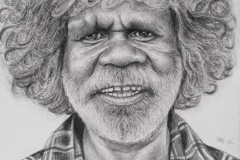 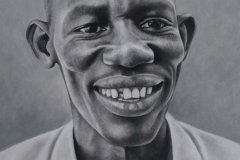 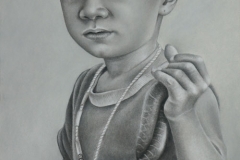 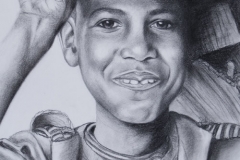 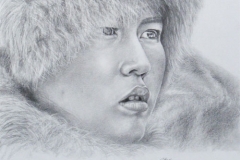 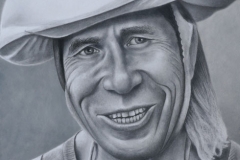 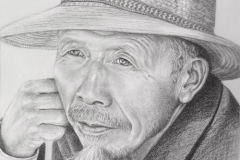 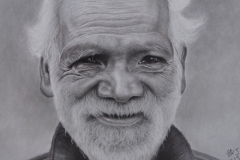