I received a commission request from a man whose ancestral roots are in India but who grew up in Kenya and has spent most of his adult life in the US. The request came via his niece who lives in the UK and has helped my customer with his personal project a great deal. My customer had been researching his grandfather’s history for a long time and wanted me to draw a facial composite of his grandfather from his description since there were no photographs left of him; they had been destroyed in a fire.

There was, however, one image of railway workers and managers in Kenya which he had concluded including his grandfather as a young man in his 20s. This photo was not clear enough to see facial features properly from it and the customer preferred me to depict his grandfather as a middle-aged man. This is because he recalled having seen a passport photo of his grandfather in his 40-50s decades ago and based his memory of him on this photo since he had not seen his grandfather since childhood. This was going to be a challenging task, but the customer stated having a very good memory for faces, therefore we gave it a go. He was able to use family photographs as reference images and guided me to use various family member’s features for the composite portrait. We communicated via email and Skype and worked on this little by little for a few months. Finally the composite portrait was finished and I sent the original along with prints of it to my customer. He was pleased with the final result.

A couple of months after completing this project my customer got in touch and said that one of his relatives had found an old photo of the grandfather as middle-aged. This discovery allowed us to compare the facial composite we worked on together to an actual image of the grandfather. You can see both pictures below and determine what level of likeness was achieved. 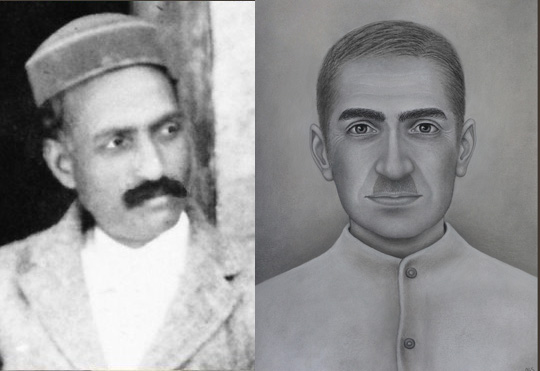